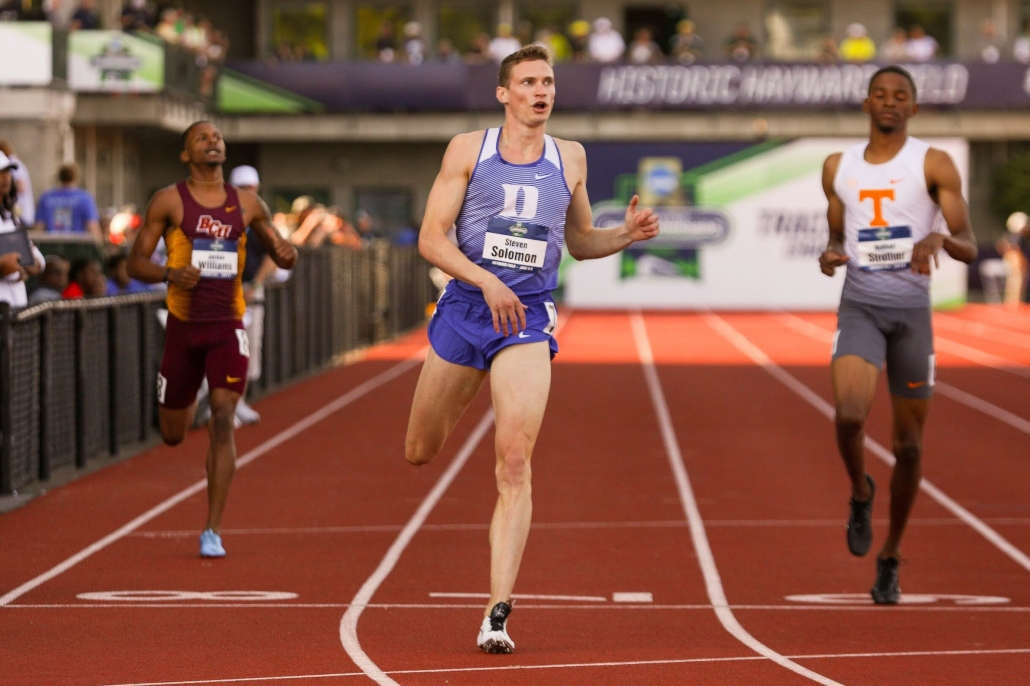 Today we interviewed Steven Solomon, an Australian Olympic sprinter who is the record-holding champion for the indoor 400 metres. He is the second fastest junior of all time for the outdoor 400m.

Stevie, tell us your sporting story


I represented Australia for the first time in 2010 at the World Junior Championships in Canada. I won my first Open National title at the age of 17 which qualified me for the World Championships that year in Korea. I competed at the London Olympics in 2012, Moscow World Champs in 2013, Glasgow Games in 2014, the London World Champs again in 2017 and the Commonwealth Games in 2018. So, it’s been a busy time for me. I’ve been lucky and I’ve shared a lot of success. I’m now looking towards the Tokyo Olympics.

My most proud and significant achievement was making the final of the London Olympics in the 400 metres. I’m most proud of this because I came into that competition with no expectations of making it close to the final. Most people thought it would be amazing if I made it out of the heats in the first round. I went into the championships with a goal of making the finals when no one else really believed I could, besides me and my coach. I went in and I did it! The best part was I got to share the experience with my family which was amazing.

The thing about track and field is, most of the time there are lows. Unlike any other sport, you’re comparing yourself against the time. When training or in competition, it is directly measurable and relatable to what you’ve done in the past. So that’s a huge differentiator from team sports where you can have a bad game and you can score a goal or you could have an amazing game and not score a goal.

A colleague of mine once told me “you have to celebrate the wins in this sport because most of the time you live in the losses”.

So, I’ve definitely had plenty of lows. A difficult moment for me was when I failed to qualify for the 2016 Rio Olympics. This was hard because I’ve always sacrificed a lot, but I sacrificed even more than usual for those games. I missed the Olympics by four hundredths of a second but I was able to move on quickly knowing I’d done everything I could to give myself the best chance at making those games.

As an athlete you need to be physically and mentally fit. Have there been times in your career when you’ve had to call on your mental strength?

The thing with an individual sport is you’re the only person who’s accountable. With track and field and athletics, it doesn’t matter how you get around the track, it’s where the time pops up at the end. One of the challenges for me has been constantly comparing my performances. It’s hard not to compare yourself to your past successes. You need to realise that things change over time – you get injuries and your body changes; you can’t be what you once were.

Professional sport involves enormous pressures. What have been your pressures and how have you coped?


One of my strongest assets is dealing with pressure. I recently won my sixth National Championship for the 400 but in the first round of that competition, I ran one of the worst races in my life. It was very hard for me mentally. I had 48 hours between the heats and the finals which was a mental battle for me.

One of the best things about experience is I’ve developed a network of people whom I trust to give me the support I need. During this time, I reached out to my network to get the support I needed so I could move forward and win the national championship. Despite the pressure, I did it and succeeded.

I’m very good at siloing in on my focus and knowing how my body is going to respond. Performing under pressure is a strength of mine, I enjoy it.

Do you keep yourself physically and mentally fit?

Yes definitely. I’m very attuned to my body and I spend plenty of time thinking and responding to how I’m feeling. We all go through ups and downs so there are certainly times where I’m unfit and lazy, and not feeling like an Olympian. However, there are other times when I feel so strong, I could go out and do anything. There have also been times when I’ve been so stressed out that I couldn’t go to training.


I certainly don’t practice it enough. I think it’s so powerful and I definitely use it during competition times. I repeatedly tell myself “I’m ready, I can do this, I’m going to win!”. Positive self-talk helps silence doubt and fear. I won’t race unless I’m confident. Luckily, I get to choose what competitions I enter and which ones I don’t.

Do you have any rituals before a race?


I always lay my uniform out on the floor the night before. I exclusively listen to one song on race day that I don’t listen to at any other times.

How important were these rituals?

They’re not so important that if I remove them, I go into a panic. But, they’re important enough and good triggers to get me in the zone.

I’m quite an extrovert so one of the difficulties I have is, I tend to commit to lots of things, even when I’m not up to it. It’s hard for me to push back. I’ve definitely become better at saying no or asking to reschedule if I can’t do something.

Do you consider yourself a resilient person?


I think so. One of the best things that sport gives you is a sense of resilience. There’s nothing harder in life than what I put myself through on the athletics track. Sport puts you in situations where you can’t build on anything, you have to start from scratch again. Knowing how hard this is, and continuing to go through it, which I’ve had to do over numerous injuries, has definitely stretched that resilience muscle in me.

The best advice I can offer is to create an environment for yourself where you don’t have regrets. Take control of your life and set it up so that if things don’t pan out, you won’t feel regretful. You can feel upset, angry and cheated, as long as you don’t have regrets. It’s very important for athletes to have a mentor specific to their field. If you’re a cricketer and the opening batsman, your mentor should be someone who’s opened the batting for Australia. You need to find a mentor who understands what that feels like to be you.

Case Study: Self-Care in the Workplace

Feeling Down? Here’s 7 Ways To Boost Your Mood Naturally
Scroll to top