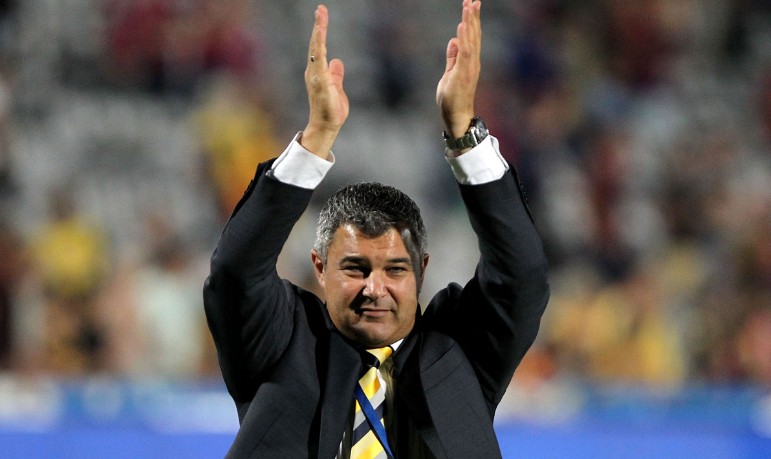 In today’s interview we talk to Phil Moss, former A-League Head Coach and Assistant Coach and ex-professional football player, who has an impressive sporting career spanning over two decades. Phil is a football analyst for Big Sports Breakfast and Fox Sports, and the President of Football Coaches Australia.

Phil, tell us your sporting story

I started out playing junior football for Manly Warringah up until the age of thirteen. I then went to private schooling at Shore in North Sydney where they didn’t have football at the school so my playing came to a grinding halt. However, when I started in year eight, they introduced footie at the school so things kicked off again and I’ve been playing ever since.

I played for the school which opened up a lot of opportunities for me and I got to travel to New Zealand, South America, North America and England. On the flip side though, as I was playing for the school, I didn’t get the opportunity to play for external teams so things like the Australian Institute of Sport weren’t an option for me.

For many years I played for Manly, Eastern Suburbs and Central Coast teams, and then I finally got my crack at the National League with Northern Spirit when I was twenty-six — “grandfathered” in football terms! If you want something badly enough though, never give up the fight and don’t stop believing because it’ll eventually happen. I’d finally gotten to where I wanted to be and was playing in front of some big crowds, so it was all worth it in the end.

I had a few seasons playing football there and then I fell into coaching. I did one season as a player-coach which isn’t the best way to start your coaching career, but it was an interesting learning curve for me being both a player and a coach. My coaching career wouldn’t have happened had I not pursued a career in playing footie first.

I had seven great years at Manly United as the head coach and the technical director of the whole football department. After that I went to the Mariners as Graham Arnold’s assistant until 2015. I did three years as an assistant and almost two as the head coach.

After that I worked in the media with Fox Sports, Big Sports Breakfast and several radio programs. I coached at Narrabeen and then in 2017 signed on with Sydney FC as an assistant coach to Arnie (Graham Arnold) for a season.

Signing a professional contract for a brand-new club at aged twenty-seven gave me the validation I was seeking as a player. I had reached my goal and it was a vindication of all the hard work I’d put in. Playing in front of 19,000 people was an incredible experience and such a privilege, it was very humbling. Being a professional player laid the platform for my coaching career and I’m very grateful for that.

My two trips to Israel with the Maccabiah Games were experiences I’ll never forget. Playing in South America in front 80,000 people as a curtain-raiser to the main game was another highlight. Seeing the football culture in South America was out of this world.

As a coach, being part of the Olympic qualifiers and not getting the opportunity to go was definitely a career low. From a playing perspective, it was not having longevity as a footballer – I would have like to have played for longer. But the universe had other plans for me! I was definitely born with the essentials to be a coach and a leader; it also comes a lot more naturally to me than being a playing ever did.

The situation with the Mariners was a big one for me. I worked hard to get to that level as a coach but there was a lot of things out of my control. The game can be cruel, as much as it gives, it can also be cruel and kick you in the teeth. But you find that you’ve got these amazing survival instincts and mechanisms are built into to you in a very deep way that you don’t realise until you actually have to use them.

What have been your career highlights as a coach?

Winning my first grand finals! To see the joy and elation on my player’s faces when they win a trophy is priceless. Coaching my local clubs – Northern Spirit, Manly Warringah and Manly United – have also been major highlights as I used to play for them and this still makes me very proud.  Working with a guy like Graham Arnold for so many years is a definite highlight. Being assistant and then the coach at the Central Coast Mainers and then assistant coach in my hometown at Sydney FC.

I see coaching and leadership as a real privilege and an opportunity, it’s certainly not an obligation. When you look at things with the glass half full, you can turn anything into a highlight and that’s the way I like to look at things.

I really appreciate what the game has given me, from the age of probably five, when I first laced on a boot, playing for Cromer Strikers, down on the Northern beaches. The game has just kept giving. And I never feel like the game owes me anything, it just keeps giving.

Is there a time in your coaching career where you had to draw on your mental strength?

Every single day. I don’t think a day goes by where I don’t have to draw on my mental strength as a coach because coaching is a very lonely job. Even your assistant coaches don’t get it – they don’t have the responsibility you do. The responsibility a coach has on his shoulders is huge. You need to get the best out of your team and get results. So many people are depending on you – the stakeholders, the players, the fans, the media, the board. It takes a lot of mental energy to keep everyone happy. You have to really believe in yourself and have resilience.

The time when you have to show the most mental strength is when you’re losing a game or a championship. I’ve got a saying which goes “When you win you grin, when you lose you learn.” When you’re losing, your mental strength really needs to kick in. There’s a lot of noise around you and everyone has an opinion on what you should do. They key though is believing in yourself and sticking to your guns.

Dealing with player issues such as mental health problems also takes a lot of mental energy.

Do you think it’s easy for players to come and talk about mental health in sport now?

I think it’s becoming easier, but it can be challenging for some. As a coach, I always try to create a safe environment where people can talk honestly and openly about how they’re feeling.  Having a transparent environment is key. The end goal is to ensure that your players and staff know they can come forward with issues they’re having. Otherwise, they bottle things up and never perform at their best. I don’t believe mental health is a weakness, it’s a reality in today’s society.

How do you manage pressure from stakeholders?

Having an inner self-belief and surrounding myself with positive and honest people, both inside and outside of the game definitely helps. It’s important to have good sounding boards who will be honest with you and not sugar-coat things. People who can listen and give you the support you need is essential.

Yes, and visualisation too. I’m a big believer in sports psychology and learning coping mechanisms. Not to just cope, but to thrive and succeed. I use visualisation a lot and have achieved real results from it. I once visualised scoring the winning goal in an important game and I did! Believing I could do this and then it becoming a reality was remarkable!

Being able to block out negative self-talk (the little man who sits on one of your shoulders) is also key. Even though it’s not easy, those who succeed are able to do this efficiently.

What motivates you to keep going on good days and on bad days?

As a player, it was to get the best out of myself and contribute to the team. As a coach, it’s getting the best out of other people. Being able to help people thrive and believe they can achieve anything is what gets me out of bed in the morning. Having this positive mindset as a leader or coach gives you a reason to keep going. It’s something I take very seriously.

I do. The older I get, the more I do it. In order for me to get the best out of the players I’m coaching, I need to be in a good state of mind myself. Exercise and a healthy lifestyle are a key part of this.

How have you managed your mental health through the tough times?

Support is massive. I have to give credit to my partner Penny. One day she said, “The only person on this planet that can help you is you.” I sought some psychological help and at one stage, I went on medication to help get me through. Eventually I realised what I really needed was support. Having support helped me to see things differently and when I put positive messages out to the universe, that’s when things started to change. And that’s why opening up to someone and going and seeking some support is so important.

The defining moment for me was saying to myself “I don’t feel right within myself. I’m not happy, I don’t have any energy or purpose – I need to seek help”.  This was when things really started to turn around for me. Previous to that, I believed I couldn’t show weakness and that stopped me from reaching out for help.

Don’t be afraid of self-reflection and checking in with yourself during times of stress and pressure. Always ensure you stay in the moment and be honest with yourself. Don’t look at your situation with rose-tinted glasses as you’re only fooling yourself.  An integral part of being a leader and keeping your head in the game is knowing who and what you are.